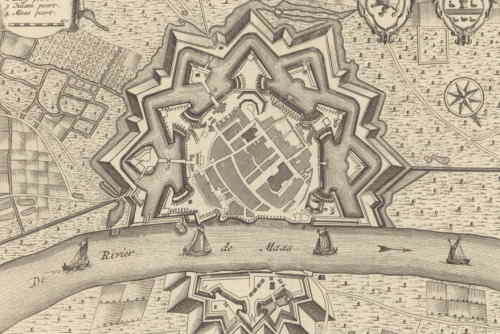 The meeting didn’t start well. I had travelled to Geneva to meet with a Procter & Gamble executive and he had forgotten about our meeting.

My goal for the meeting was to try avoid a battle between standards for wireless charging of mobile phones. It was November 2011 and P&G had recently announced a joint venture with Powermat to market “small charging mats and receivers that wirelessly juice up cell phones and other small electronics”. The joint venture announced that it would use Powermat’s proprietary wireless charging technology.

The year before, in August 2010, the Wireless Power Consortium (an open industry group with 100 member-companies at that time) had announced its standard for wireless charging, called “Qi”, and the first Qi-compliant products had arrived on the market later that year in September.

My assertion to P&G was that their joint venture would be better off making their products Qi-compatible. By adding Qi to Powermat products, the competition would shift from ‘between technologies’, to ‘between products’ , and Duracell would be able to harness capabilities in which it excels: creating differentiated products for the right price, supported by a strong brand and a worldwide distribution network.

And adding Qi would also reduce significant risks for Duracell:

The response from the P&G executive was:

Anyway, the concern about differentiation was probably not his main concern. The P&G executive seemed convinced that market leadership would be achieved by the brand that spent most on consumer advertising. He was not interested. The opportunity to avoid a standards battle between Powermat and the Wireless Power Consortium was lost.

Powermat and P&G went on to invest in advertising the Powermat wireless chargers. They contracted Jay-Z as the face of their advertisement campaign and installed wireless chargers in Madison Square Garden in 2012.

Fast forward to October 2017, and the market share of Powermat-compatible mobile phone chargers is negligible. On the basis of best sellers ranking on Amazon.com, I estimate their market share is below 1%. The rest, more than 99%, is Qi-compatible in a fast growing market that shipped 53 million wireless chargers in 2015 according to IHS.

The Wireless Power Consortium and Powermat chose two very different strategies. The Wireless Power Consortium followed the classic model used in consumer electronics standards such as DVD, USB and Bluetooth. In this classic model, standards are developed by an industry consortium in which competitors work together with the goal to make their products compatible. Powermat on the other hand, aimed to establish a proprietary de facto standard. Control over the standard was kept exclusively with Powermat and business partners of Powermat, such as Procter & Gamble.

The article “Managing Proprietary and Shared Platforms”, published by Thomas Eisenmann in the California Management Review (Vol. 50, No 4), provides a useful framework for analyzing the two strategies.

For this analysis I will use the terminology used by Eisenmann.

The set of rules and infrastructure that allow users to interact with each other. Eisenmann calls this a “platform”.

The electronics industry uses the term “standard” or, more accurately, “interface standard”. Qi is a platform. The Powermat technology is also platform.

DVD, for example, is a two-sided platform: The movie industry publishes movies on DVD discs, and the consumer electronics industry sells DVD players that play the discs.

Wireless power standards are also a two-sided platform, with mobile phone manufacturers on one side and on the other side the home charger manufacturers, car manufacturers, and hospitality service providers (hotels and restaurants).

Proprietary platform
A platform controlled by a single company, or by a group of business partners.
Shared platform
A platform controlled by a group of companies. To qualify as a shared platform, the controlling group must include competitors.
Network
The group of users of the platform.
Network effect
Interactions with a platform are subject to a “network effect” when the value of using the platform increases with the number of users.
Free-rider
A company that benefits from interacting with the platform but doesn’t contribute to the development or promotion of the platform.
Users

Depending on the context, the term “users” can refer to:

Investments, the free rider problem and the penguin problem.

Eisenmann’s analysis of the optimum platform strategy starts with the question: “Does network mobilization require big investments that are subject to free rider problems?”

A shared platform, such as the Qi wireless charging standard, is not capable of making big investments in consumer advertising because companies that use the standard are reluctant to pay for advertisements that will also benefit companies that have not paid. This “free rider problem” is the main handicap of shared platforms.

Powermat, on the other hand, did invest in advertising to promote its wireless charging system. From 2012 onwards, Powermat and its business partners also invested in the installation of wireless chargers in Starbucks locations, with the goal to create a world-wide public infrastructure for wireless charging. 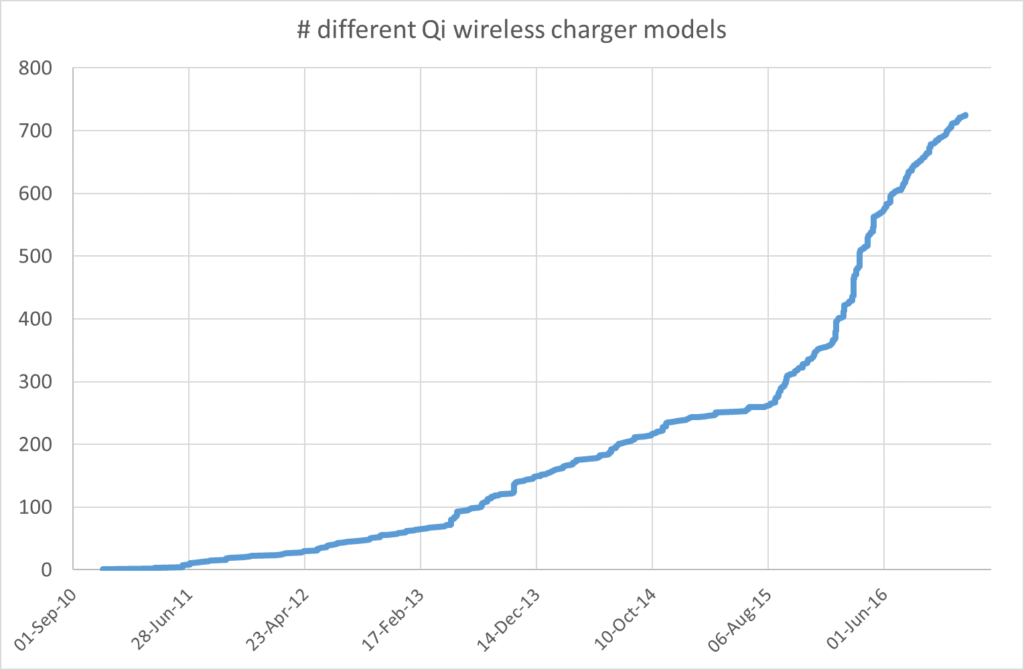 Looking back, it’s clear that network mobilization (=adoption of the standard) did not depend on big investments. The marketing investments made by Powermat and Procter & Gamble did not have any significant effect on the adoption of the Powermat technology. Similarly, the investment in deploying wireless chargers in Starbucks stores had no effect either.

So, why did these massive investments fail?

In my view, these advertisement campaigns had little impact because the products did not meet user’s expectations. Powermat could initially charge a mobile phone only via a special phone cover or dongle. That is not a convincing advantage compared with plugging in a charging cable. The user experience is much better when the wireless charging capability is integrated in the phone. I would argue that their investment in advertising came a couple of years to early.

Eisenmann refers to the need to wait until others have invested as the “penguin problem”, after the dilemma facing hungry penguins at the edge of an ice shelf in a sea that may hide predators – the first to jump faces the highest risk. He writes “Starting a two-sided platform presents a similar dilemma: prospective users on each side will not invest in the platform until they are confident there will be enough users on the other side.”

Qi products were predominantly aimed at the consumer home market. It helps that this is the place where people charge most. It is also easier to be profitable in the home market because the penguin problem is far less problematic for home chargers. Consumer who purchase a phone with wireless charger will immediately benefit from using the wireless charger at home. Massive investments in infrastructure are not need to create value for consumers and are not needed to be profitable. Even today, wireless phone chargers are used mostly at home, in the office, and while driving a vehicle. And these markets are served almost exclusively by Qi chargers.

R&D investments are not subject to free rider problems

A contributing factor was the low maturity of wireless power technology in 2010. Several companies experimented with wireless phone chargers in 2000-2010. Ericsson, Motorola, Nokia, NXP, Palm, Philips, Sanyo, and Visteon (to name a few that I am aware of), had internal research projects and some brought products to market with limited success. The basic technology (magnetic induction) is well understood, but it was very difficult to make the product safe, efficient, and easy to use. The first Qi products as well as the first Powermat products had many issues. The innovation in Qi products, however, was much faster than the innovation in Powermat products.

Innovation in Qi products was faster because:

Eisenmann remarks “Unlike infrastructure and user subsidies, R&D spending typically does not engender severe free-rider problems for shared platform providers.” It is not surprising, therefore, that the Qi platform is strong in rapid innovation.

By the time the market size became significant, around 2013-2014, Qi products were thinner, lower cost, more efficient, and had more advanced safety features such as improved methods to detect and prevent heating of metal objects. 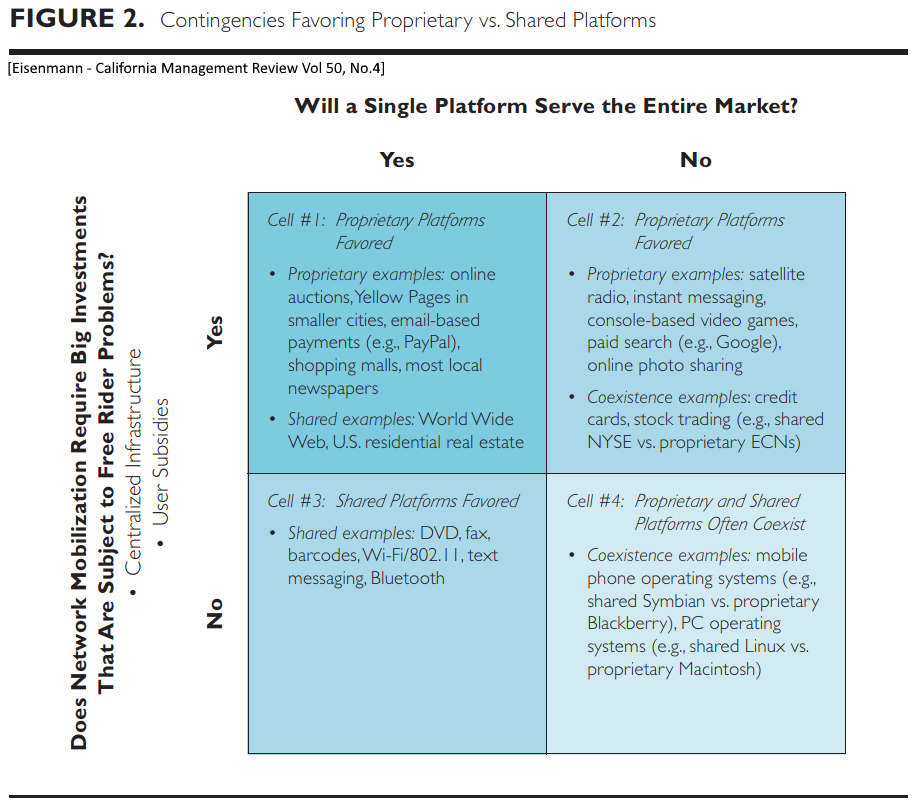 How strong is the Winner-Takes-All Dynamics for wireless phone charging? The 2017 market share in wireless mobile phone chargers (less than 1% Powermat, more than 99% Qi) suggests that the effect is strong. Proprietary platforms are disadvantaged when Winner-Takes-All Dynamics are strong because companies that need to invest in developing products for a proprietary platform will fear hold-up and aggressive price increases when the proprietary platform wins and achieves a monopoly. The risk of hold-up is low for shared platforms, making that a safer bet.

An obvious consequence of Winner-Takes-All Dynamics is that the loser loses all. Shared platforms provide relative safety against losing it all. Proprietary platform are considered a high risk, although with high reward. Eisenmann writes “Most managers and entrepreneurs are risk averse, so they are not likely to find this gamble appealing”. The Procter & Gamble executive I spoke with in November 2011 didn’t seem concerned about that risk. At that time he saw a market where market share would be determined by the level of investment in advertising and his competitors looked unprepared to match Procter & Gamble.

According to IHS, The wireless charging transmitter market more than doubled in 2015, as 53 million transmitter units shipped globally.

The market share of Powermat compatible chargers is probably less than 1% (own estimate based on best sellers ranking on Amazon.com).

2016
Starbucks stops the roll-out of Powermat chargers in their stores (own observation).
Sep-17
Apple announces that the iPhone 8 and iPhone X support Qi. The new iPhones don’t support Powermat wireless chargers
Sep-17
Powermat announces it will upgrade its public charging pads to support the Qi standard.

The article “Network Effect” explains the diffculty of introducing new products that are subject to network effects.

The article “Managing Competition Between Interfaces” discusses how interface specifications compete for adoption.

The article “Why Startups Fail” will help you understand that it risky for startups to target markets that are subject to Winner-Takes-All Dynamics.

The article “Choosing name and logo for a group of cooperating companies” shows how good and bad logo design influences the competition between standards.

Picture shows the fortifications around the town of Grave in The Netherlands, designed by Menno van Coehoorn around 1700. Courtesy Brabants Historisch Informatie Centrum

Two interface standards will compete for adoption when they target the same application and are mutually exclusive (cannot be combined in a single product). Managing competing standards in separate organizations makes it easier to let the market decide the winner.